Spelling Bee - raising the profile of spelling AND having fun!

Are you a good speller? How often do we hear this? Yes, is my reply. But how and why??
I vaguely remember how I learned to read and write, but spelling?? Not a clue.
My peers tell me we were sent home with lists to learn and I do remember having to learn to spell 'Mediterranean' (and yes, I spelt it without the aid of Spell-Checker and until just now, I can probably count on one hand the times I've had to write that word) and the trouble some of my peers got into for 'failing' their weekly spelling test. So, in this day and age of Speller Checker, predictive texting and text speak, why do we make such a big deal out of being a good speller??
The problem with Blogging is that one de-clutters one's mind onto paper. My last question will remain rhetorical (for the moment) as I really want to write about Spelling Bee.

My school, like many, was very concerned about the standard of spelling amongst our children (and some adults). We had embarked on a journey to develop consistent and high quality teaching and learning of phonics throughout the school - in retrospect, this was imperative to have firmly embedded before we could even look at spelling. Three years on we have daily phonics lessons for all children (who require it) following our adapted Letters & Sounds programme (we have Phase + groups to ensure each phase is securely embedded before moving onto the next phase). KS 1 set across four classes (we're two form entry) and are assessed termly. Through termly meetings we ensure the right adult is with the right group to ensure very high quality teaching of all our children. Significant training has been given and is monitored to ensure practice remains outstanding.
The impact of these measures has seen a dramatic fall from 78% of children (2012) in Year 3 & 4 requiring phonics support to 14% (July 2015). We now only have KS2 children requiring daily phonics who are on the SEN register and have significant needs. The impact has also seen a significant rise in our KS1 & 2 SATs results.

Back in 2013 I missed the competitive nature of school competitions so I spent some time researching ways to bring a spelling competition to our school. Time and time again I came back to American websites about their Spelling Bee. So, I contacted a wonderful lady in America through http://www.spelling-words-well.com/spelling-bee-words.html and purchased their Spelling Bee resources, for a very small sum of money.

Together with my Literacy Team, we spent a term 'Anglosizing' the words and sentences and developing a word and sentence bank for our Early Years Children. With our resources ready, we then informed the staff of our plans to hold the first set of competitions in March 2014. Initially staff were concerned that our youngest children would not be able to cope with the 'pressure' of the competition. This was definitely not  the case. The 'contestants' displayed a pride in representing their class, they showed a focus and team man-ship beyond their years and their peers provided unwavering support.

A very small proportion of staff voiced their concerns about the inclusive nature of the competition for our less able and, in particular, our dyslexic children. However this was quickly dispelled through the class Spell Down competitions were all children took part, the teacher was able to differentiate spellings, so that all had a sense of achievement, and all children were able to show this achievement through being awarded Spelling Bee stickers. We also discovered, after the competitions, that 30% of finalists were Pupil Premium children.

We had stickers made up 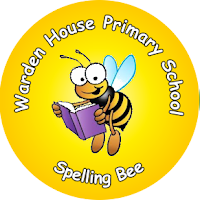 and purchased wonderful trophies for our winners. Altogether, with prizes, the cost came to less then £100 including the original American spelling packs! And they can be re-used!

We held Spelling Bee class Spell Downs in each class to determine the best spellers who would then compete in finals - four from each class. The big surprise for all staff was the children who were the best spellers rarely got through to the group competition stage. We hadn't taken into consideration the performance element of the competition. In the class Spell Down stage children had to verbally spell out words, they weren't allowed whiteboards to practice and had to follow the rule that the first attempt was the one taken.

We then arranged three competitions between Year 1 & 2, Years 3 & 4 and Years 5 & 6. Early Years took part too but kept their competition in their classrooms. These were to be held on different afternoons, in the hall and with parents and family invited. We made a rule that no under 5's were allowed to attend to prevent disruptive noises of toddlers impacting on the concentration of our young pupils - without exception, our parents adhered to this rule.

I was determined that the competitions would have a professional air to them so I invited our Vice Chair of the Governing Body to adjudicate all three of the competitions, Our Bursar, PA to our Principal and our school secretary took an afternoon each to sit on the panel to score and time keep. Parents were invited and Key Stage classes were the willing audience. We had very clear rules - collaboration before answering, first answer was taken, even if the right spelling had been written on whiteboards and NO Clapping. We quickly realised that if the audience clapped after each correct spelling we would have been there till Christmas!! So, the Warden House Silent Cheer was demonstrated, practised (including parents) and used effectively to ensure the flow and pace of the competition was maintained.

Our Principal, Graham Chisnell, took centre stage as Word Master. The pace of the competitions was intentionally quick, without too many ad-libs, so that children could maintain their focus, the audience wouldn't get bored and we could have a complete competition in an hour!

The tension in the school hall was, at times, unbearable. With the collective holding their breathes, parents muttering 'that's not fair, they can't spell that word' then being totally amazed when our very young children confidently spelled a word. The pride on adult faces was astonishing as the children worked collaboratively through complex spellings. Time and time again Mr Chisnell had to 'up the ante' by moving through the word sheets to find more complex words. Incredible, amazing, outstanding were frequently heard from the adult audience.

Each team had to spell 10 words - one word, a team at a time. The scores were given. The top 2 (and in some cases 3) teams then went on to 'Sudden Death' until we had a winning team. We then had a short break whilst class teachers spoke to their teams to identify one child who would then compete for the individual accolade of best speller. Prizes were awarded and photos taken (we had tasked a Year 6 boy to take photos in all the competitions so had plenty to choose from for the Press release) and thanks given to all who had attended.

The feedback from children was amazing. Not just those who had taken part in the group competitions but all children. There was a buzz around the school, children proudly displaying their stickers and Spelling Bee badges (awarded to those in the group competitions) and talking about what fun spelling was. Adults asking when the next competition was going to be held and a 'suggestion' from a parent that we should have a parent/child v. teachers competition (will think about that one!!)

So.. what happened next?

I took the idea to our Deal Learning Alliance Literacy team (DLA is our local collaboration of 11 schools) who loved the idea. However when colleagues discussed it with their Headteachers they were less then enthusiastic but we ploughed on and in March 2015 we held our first round of KS2 competitions. To even numbers up, we invited a local Independent school to be our twelfth school and organised 3 schools to hold the semi final competitions in their school halls. To raise the profile even more we held the final (between three schools - one team from each of the semis) at out local Astor Theatre. The children competed on stage, under bright lights and in front of an audience of their peers and family. The local press were called and medals and a finalist shield was awarded to winning Year 3/4 team and winning Year 5/6 team. We, the Literacy team, were determined that this would be an annual event.

The headteachers (all of them) were so enthusiastic that they wanted a KS1 competition. One HT admitted that she had had concerns prior to the semi finals mainly because she hadn't understood the format and was very worried for the emotional well-being of her youngest children. But her fears were allayed when she observed one competition where the youngest child from a visiting school was only 5!  We held the KS1 competitions in Term 6, with the final being held in the Theatre. It was truly amazing to see children as young as 5 sitting on a stage and confidently (and collaboratively) spelling words. But more importantly, having fun.

Following on from the DLA Spelling Bee competitions I attended our County Literacy Leaders meeting and was asked to share the Spelling Bee with colleagues. I am now supporting schools in 3 different Districts in Kent who have held competitions.

The Future
We will be continuing our in-school competitions which have already been timetabled for Term 1 2015.
The DLA Headteachers have determined that 'we will' have Spelling Bee next year. We have already pencilled in dates (KS2 - March 2016, KS1 - July 2016)
I have been asked to present Spelling Bee at this years' KAH Conference

My initial rhetorical question may be discussed in a future Blog!